In virtual reality, we replace the user’s physical world with another entirely. This has important use cases. However, augmented reality and mixed reality applications build upon the user’s real-world environment to create a hybrid reality where real world objects and virtual objects coexist. This opens up a whole new set of application possibilities where the user can still interact with their surroundings, but enhanced with information.

In this session, Ayşegül Yönet will explore VR, AR and Mixed Reality. She’ll show you what they are, what they are useful for and how to get started with them. 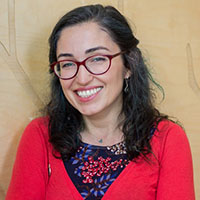 Aysegul is a Senior Azure Cloud Developer Advocate at Microsoft. Aysegul, focuses on Spatial Computing, Mixed Reality, AI, Angular and Data Visualization. She is a Google Developer Expert for Web Technologies & Angular and an active conference speaker. She previously worked as Senior Software Engineer at Nrwl.io, Autodesk Play, a 3D and VR authoring tool and A360 Viewer and A360 Drive. She enjoys teaching at a variety of non-profit organizations aiming to increase diversity in the software industry. She is the co-founder of code4good, an organization with the goal of helping people to contribute to open source. Previously she led Women Who Code meetups, Girl Develop It workshops and was a CTO at AnnieCannons, a bootcamp dedicated to teach tech skills to human trafficking survivors.