The Future of Development

As we discussed in October, the trend towards serverless architectures is changing the way developers build their apps. It solves a number of problems but also brings new complexities. Brian LeRoux will discuss how one tool is aiming to address the complexities it can bring.

Complex, conversational bots are also changing the ways in which businesses interact with their customers. Many common tasks once handled via the phone or chat with a live person can now be handled by an automated bot. Andy Barnov will teach you how you can build a conversational bot using Ruby.

With functions as a service, cloud providers have signaled the smallest billable unit of computation is a single function execution. It’s a beautifully simple idea, rejecting the metaphor of a server, and freeing developers to design smaller and simpler services. We can iterate on our code with a high degree of isolation, without fear of affecting other parts of the system; deploy systems in seconds with zero downtime; and always be available regardless of load.

However, building serverless-y apps is very new and as such fought with early days complexity:

In this talk Brian will walk you through a new approach to architecting applications with plain text using arc.codes to create apps in minutes and subsequently deploy in seconds with zero downtime and unprecedented availability. 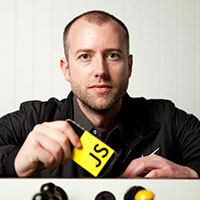 Brian LeRoux is the Cofounder/CTO of begin.com which is a new breed of app that helps teams stay organized in Slack. In the process of developing begin.com an entirely serverless cloud functions thing emerged called arc.codes. In a former life Brian worked at Adobe on PhoneGap and its open source upstream Apache Cordova. A longtime fan of the open web he created wtfjs.com and sports a questionable &nbsp; tattoo. Brian believes the future is mobile, seamlessly running in the cloud, on open source software and will be created by hackers like you.

Learn how to quickly get started with Rubotnik boilerplate to build a bot with rich features. Rubotnik is framework- and database agnostic and promotes a «bot-end» approach to build conversational interfaces with an easy-to-follow DSL. And it’s easily deployable to Heroku! 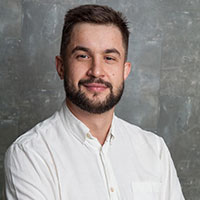 Looking for a switch from a 15-year long career as an international TV reporter, Andy taught himself programming and got his Ruby/Rails bases covered by graduating from Le Wagon bootcamp in Paris. While pursuing a Computer Science degree in Amsterdam, Andy enjoys teaching beginners to code at various Wagon schools in Europe.

Rubotnik is his pet project that allows anyone with a minimal programming knowledge to quickly launch a functional (and framework independent) Facebook Messenger bot.

Getting Started with Serverless